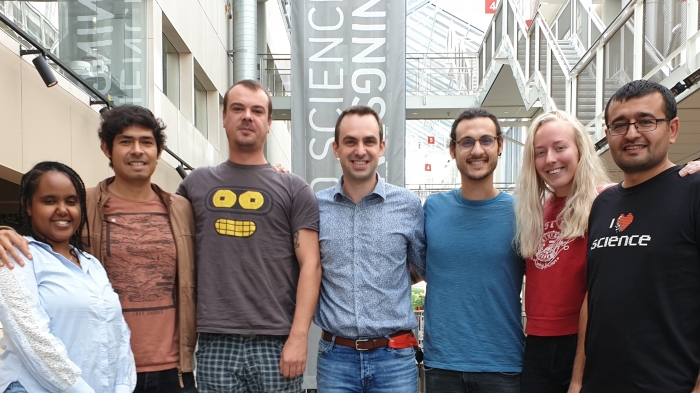 Anthony Mathelier is a computer scientist by background who completed his PhD under the supervision of Dr. Alessandra Carbone at the University Pierre and Marie Curie, Paris, France, in 2010. His PhD research aimed at the development of computational tools to predict miRNAs in eukaryotes. He joined Dr. Wyeth Wasserman in 2011 at the University of British Columbia, Vancouver, Canada, as a postdoctoral fellow. He became the deputy group leader in Dr. Wasserman lab in 2013. He focused on gene regulation at the transcriptional level during his postdoc. In particular, understanding how transcription factors (TFs) bind in a sequence specific manner to the DNA and how the alteration of transcriptional regulation contributes to cancer. He is the group leader of the Computational Biology & Gene Regulation team at the Centre for Molecular Medicine Norway, part of the Nordic EMBL partnership, since May 2016.

Aziz Khan completed his PhD in bioinformatics from Tsinghua University, Beijing, China, in July 2016. The main focus of his PhD research was the development of computational methods and resources to perform integrative analysis and help the research community in studying the functional importance of super-enhancers. His primary research interests are bioinformatics, computational biology, machine learning, and integrative analysis of high throughput sequencing data with an emphasis on regulatory genomics and epigenomics. He joined the lab as a Postdoctoral fellow on October 2016.

Jaime Castro-Mondragòn completed his PhD in Bioinformatics under the supervision of Dr. Jacques van Helden at the Aix-Marseille Université, Marseille, France, in 2017. His PhD work was mainly focused on the development of tools to analyze Transcription Factor Binding Motifs, mainly on the clustering of motifs to reduce motif redundancy and to group TF motifs from the same TF Families. He is interested in gene expression regulation, computational biology, and data visualization. His current project is focused on finding mutations altering miRNA expression on diseases, for example, cancer. He joined the lab as a Postdoctoral fellow on October 2017.

Roza Berhanu Lemma completed her PhD in molecular biology from the Department of Biosciences, University of Oslo, under the supervision of Prof. Odd Stokke Gabrielsen in Dec. 2018. Her PhD thesis is entitled ‘Novel mechanisms controlling the interplay between SUMOylation, chromatin remodelling and transcription — A study of the functional interaction between the SUMO-protease SENP1, the chromatin remodeler CHD3 and the pioneer transcription factor c-Myb’. Although Roza is a molecular biologist by training, she developed an increasing interest in bioinformatics and computational biology. As a result, she joined the group in Jan. 2019. She is interested in transcriptional regulation and dysregulation, epigenetics, and their implications in cancer. Her current project is on the interplay between DNA methylation and TF-binding.

Rafael Riudavets Puig studied a Bachelor in Biomedicine at the University of Barcelona followed by a Master in Bioinformatics and Biostatistics at the Open University of Catalunya. The title of his Master thesis was “Identification of highly altered genes in Breast Cancer Patients through the integration of multiple omics data”. The objective of this thesis was to identify genes showing DNA mutations and/or Copy Number Alterations, Hyper/Hypomethylations and Over/underexpression when comparing paired Tumor vs Normal Breast Cancer samples from The Cancer Genome Atlas. This would be followed by integration of gene alterations together with pathway information to also identify highly altered pathways. Rafael joined the lab in August 2019 as a PhD candidate.

Marius Gheorghe is a computer scientist who obtained his Bachelor degree in Micro-computer Programming and Embedded Systems at Université Paris 8, France, and his Master degree in Computer Science Theory and Advanced Technologies at the Leiden Institute of Advanced Computer Science (LIACS), Leiden University, The Netherlands. His interdisciplinary Master thesis was entitled Physiological Ageing Described by Genome-Wide Expression Trends, under the supervision of Dr. Vered Raz, Dr. Thomas Bäck, and Dr. Michael Emmerich. The aim of his research was to use microarray gene expression data in order to characterize aging in different human tissues and identify the age at which major changes in genetic expression profiles occur. He joined the lab as a PhD candidate in September 2016.

Solveig Klokkerud is a Master from the Biotechnology/Bioinformatics program of the Norwegian University of Life Sciences. Solveig is working on using matrix factorization to infer transcription regulatory networks in cancer.

2020-01-20 New group member
Welcome to Vipin Kumar who has joined the group for 3 years as a postdoctoral fellow!

2019-10-21- New publication
Beware the Jaccard: the choice of metric is important and non-trivial in genomic colocalisation analysis. Briefings in Bioinformatics.
Publications page.

2019-10-21- Open position
We have an open position for a Research Scientist / Software Developer available in the lab. More info at join-us.

2019-10-17- Open position
We have an open PhD student position available in the lab. More info at join-us.

2019-08-19- New group member
Welcome to Rafael Riudavets Puig who has joined the group for 3 years as a PhD candidate!

2019-05-08- Talks accepted
We are very happy to share that the group got 3 submissions accepted for long talks at the upcoming ISMB/ECCB conference. Aziz, Jaime, and Roza will present in Basel!

2019-05-06- Open position
We have an open postdoctoral position available in the lab. More info at join-us.

2019-04-30- Funding
We are happy to share that we received two fundings totalling 710k NOK to work on collaborative projects with the groups of Hege Russnes and Rolf Skotheim.

2019-01-14- Open position
We have an open PhD student position available in the lab. More info at join-us.

2019-01-02- New group member
We are very happy to welcome Roza Berhanu Lemma in the group as a postdoctoral fellow.

2018-12-06- Grant funded!
We are happy to share that we have been awarded a Young Research Talents Grant from the Research Council of Norway to support our work.